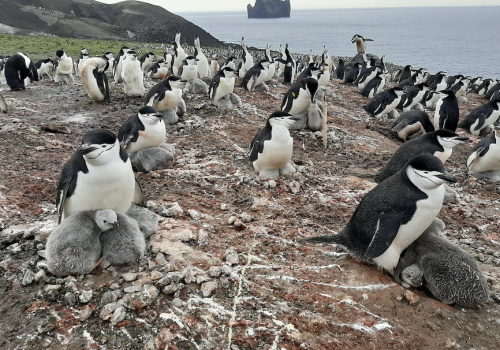 What do penguins have to do with SCIoI? Thanks to a collaboration between SCIoI PIs Alex Kacelnik and Guillermo Gallego, SCIoI was able to send event cameras all the way to Antarctica and help researchers install them there in order to study interactions between chinstrap penguins. Can’t get more remote than that, can it?

Penguins spend most of their lives at sea, but breed on land during the Antarctic summer, which goes from October to February. This is a good time of year for researchers to observe the birds and study their interactions. Our PI Alex Kacelnik participates in a long-term Oxford University study of penguin behavior and ecology. In his last trip to Antarctica last November, he collaborated with Guillermo Gallego, also a SCIoI PI, who provided the team with event-based cameras in order to continuously record life at an Antarctic penguin colony.

But what are the advantages of these cameras? At SCIoI, Guillermo and his team use event cameras in computer vision research. As he explains, “event cameras record changes in light intensity pixel by pixel, hence if most of the scene is static, they’ll require low power and storage.” This has potential for penguin research, Alex says. “Penguins spend long periods quietly at their nests, but show interesting behavior when interacting within a family or with neighbors. A static event camera left focused permanently on a nest can document valuable data when we can’t be there watching.” In addition to their event-based pixel time-stream information, the cameras record conventional images every few seconds, which allows for calibration between the two data modes.

Adapting the cameras and installing them in Antarctica required cooperation between the TU SCIoI team, who dealt with programming and electronics, and the Oxford team, who went to Antarctica for the field work. The team is presently examining the data and planning the next season. Watch this space for news about what penguins do when nobody is watching! 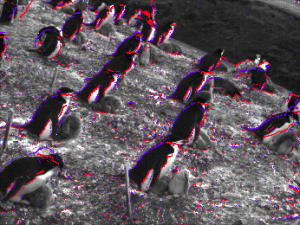