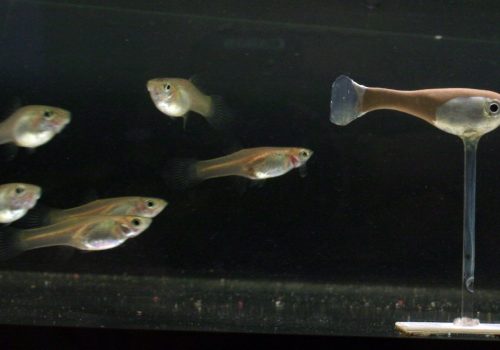 NEW PAPER: Here’s why the swarm is so fast: its individuals anticipate what the others will do

Schooling fish, moving synchronously in the water are a fascinating sight, but what most surprises viewers is the speed at which they change direction, and how coordinated these sudden movements are: how do they do that? In human ball sports, professional players can anticipate their teammates’ movements, and this allows them to react so quickly. According to a new study by researchers from the “Science of Intelligence” Cluster of Excellence at Humboldt-Universität zu Berlin (HU Berlin) and the Leibniz Institute of Freshwater Ecology and Inland Fisheries (IGB), fish can do the same. Using a robotic fish, the team has shown that guppies can anticipate the behavior of their artificial conspecific and predict both the direction and dynamics of its movements. Scientific insights into anticipation also help program robots to infer people’s intentions for action.

The term anticipation derives from the Latin “antizipare,” meaning “to forecast” or “predict”.  In a social context, anticipation is a two-step process involving an initial prediction of the other’s actions, followed by an action of oneself that is integrating the initial prediction. In other words, I predict what you are about to do and I will act accordingly. Anticipation is part of broader concepts such as social responsiveness, or so-called social competence. “Forecasting and predicting what social partners will do in the future can be a great advantage in social interactions, if one’s own behavior can then be adaptively changed,” explained Professor Jens Krause, a behavioral ecologist at HU Berlin and IGB, who led the study.

Using the example of fish moving synchronously in a school, the research team investigated the hypothesis of whether individuals anticipate the movements of their neighbors in order to minimize reaction time when social partners change direction. In addition, based on previous experiments, the researchers assumed that animals organized in groups can anticipate the areas in the habitat that a social partner will visit in the future.

“We know from studies that professionals in ball sports can predict the flight curve or impact location of the ball even before the ball is thrown or kicked by interpreting the first body movements and postures of the throwing player. And they do it much better than laypeople. Anticipation is innate in us humans, but it can be improved through training and practice. A school of fish moves very fast, and we already know some aspects that influence this. But what we did not know until now is whether anticipation is part of this complex process,” said David Bierbach, a researcher in the Cluster of Excellence and lead author of the study.

The researchers let individual live guppies (Poecilia reticulata, a small, occasionally shoaling fish) swim together with a robotic fish that had previously been shown to be an accepted conspecific. The robotic fish always swam the same zigzag path in the experimental tank, ending in one of the corners, which allowed the live fish to learn both the location of the final target and the specific turns of the robot in three consecutive trials. The responses of the live fish were categorized in terms of global anticipation, defined as the relative time until the robot fish reached its final position. In addition, the researchers determined the local anticipation, i.e. the timing and location of the live fish’s turns in relation to the robotic fish’s turns.

And indeed, the fish showed anticipatory behavior on a global scale: in the third experimental run, more than half of the fish reached the target corner of the robotic fish significantly earlier than the robotic fish itself. As far as local anticipation is concerned, it appeared that the fish’s turning behavior in response to the robot changed over the course of the trials: Initially the fish turned after the robot, but this was reversed in the last trial, when they even changed direction slightly before the robot.

“The results show that fish are able to anticipate the behavior of social partners and even get better at it through training. So this is another explanation for why fish in a school – which know each other well – are capable of extremely fast collective movements,” David Bierbach summarized. Experiments like these are also important for understanding patterns of biological intelligence and developing smart technologies.