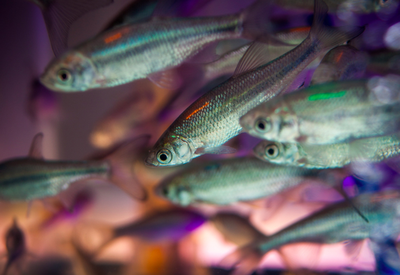 Safer side by side

When in danger, fish orient themselves by the reaction of the swarm. International study on swarm intelligence

In the event of danger, fish schools react at lightning speed and move closer together.

While the behavior of individuals under changing environmental influences has already been well researched, the reactions of schools still pose a puzzle. A recent study by Humboldt-Universität zu Berlin (HU), Princeton University, Arizona State University and the Max Planck Institute for Behavioral Biology/University of Konstanz shows that the reactions of fish within a group at risk are almost entirely determined by the adaptation of the swarm.

When a threat approaches, collective escape cascades occur, in which the behavior surges through the swarm in a flash. While the individual animals in the swarm move closer together, but not because they are frightened; the closer the animals are to each other, the faster social information spreads. This also makes the collective reaction stronger without the individual fish having to be more attentive. The results of this research have now been published in the journal PNAS.

During the experiments conducted at Princeton, fish were exposed to a natural alarm substance (Schreckstoff). This is an active substance that is released when certain fish species are injured and signals to other fish that danger is imminent.

“Swarm intelligence arises from the interaction between the behavior of individual individuals and the dynamic, variable structure of the swarm,” explains Romanczuk, head of the working group “Collective Information Processing” at the Institute of Biology of the HU, who together with Winnie Poel formulated mathematical models for collective cascades in fish. “The risk perception is essentially outsourced to the swarm structure”.

Romanczuk is a member of the joint cluster of excellence “Science of Intelligence” of HU, Technische Universität Berlin, Freie Universität Berlin, Charité, Universität Potsdam, and the Max Planck Institute for Human Development Berlin. The aim is to understand the principles of intelligence shared by different forms of intelligence. Findings gained, for example, through the analysis of fish schools, can also be used for technical developments. “They could help to develop novel, intelligent robot swarms that can be used for autonomous tasks under dangerous environmental conditions – whether in the event of a disaster or when exploring the deep sea,” Romanczuk explains.

From 2020, the HU exhibition at the Humboldt Forum will provide lively insights into the different research projects at the cluster. A school of fish projected onto a curtain will show how the animals react to potential threats. Via a joystick, visitors can also guide a Robo-Fish, through an aquarium, where it is pursued by another artificial fish, and thus get an idea of how the swarm behaves.

Translated from German. Click here for the original article.