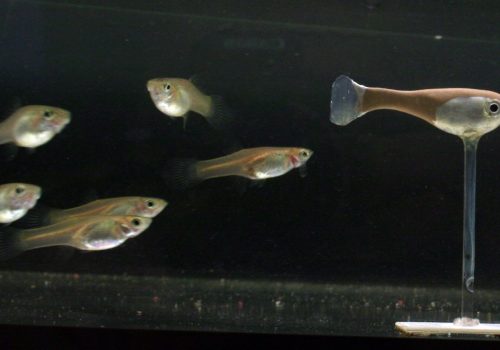 You want to be a leader? You’ve got to be fast!

The spectacular and complex visual patterns created by animal groups moving together have fascinated humans since the beginning of time. Think of the highly synchronized movements of a flock of starlings, or the circular motion of a school of barracudas. Using state-of-the-art robotics, a research team from the University of Konstanz, Science of Intelligence, and the Leibniz Institute of Freshwater Ecology and Inland Fisheries (IGB) shows that animals’ speed is fundamental for collective behavioral patterns, and that ultimately it is the faster individuals that have the strongest influence on group-level behavior. The study, published in Biology Letters of the Royal Society, gives new insights on complex collective behavioral patterns in nature, and provides knowledge that could help develop robotic systems that move collectively, such as robot swarms, driverless cars, and drones.

Researchers have long focused on identifying the emergence of collective patterns. Thanks to a combination of behavioral experiments, computer simulations, and field observations, it is clear that many seemingly complex patterns can actually be explained by relatively simple rules: move away from others if they get too near, speed up towards others if they get too far away, and otherwise move at the same speed and align with your group mates.

“Besides understanding the rules that individuals follow when interacting with others, we need to consider the behaviors and characteristics of those individuals that make up the group and determine their influence for collective outcomes”says Dr. Jolle Jolles, scientist at the Zukunftskolleg, University of Konstanz, and lead author of the study. “Across the animal kingdom, it has been found again and again that animals tend to differ considerably from one another in their behavior such as in terms of their activity, risk-taking, and social behavior”. What are the consequences of this behavioral heterogeneity when it comes to collective behavior? And how can one test for its social consequences?

The Robofish is recognized as a conspecific

To disentangle the role of individual differences in collective behavior and the mechanisms underlying this type of behavior, the research team built “Robofish”, a robotic fish that not only realistically looks and behaves like a guppy – a small tropical freshwater fish – , but also interacts with the live fish in a natural way. The experimenters paired the robotic fish with a guppy and programmed it to always follow its partner and copy its movements, lacking however any movement preferences of its own. The team then used high-definition video tracking and a closed-loop feedback system to let the robotic fish respond to the live fish’s actions in real-time.

“One of Robofish’s simple interaction rules was to keep a constant distance to its shoal mate” explains Dr. David Bierbach, who works within the Berlin-based Excellence Cluster ‘Science of Intelligence’ at the HU Berlin and the IGB, and is senior author on the paper. “Using this rule, our Robofish tried to keep the same distance to the live fish by accelerating and decelerating whenever the live fish did. Also, programming the robotic fish without any own movement preferences gave us the unique opportunity to investigate how individual differences in the behavior of the live fish led to group-level differences. In short, with our unique approach, we could isolate the effect of the fish’s movement speed on the pair’s collective behavior”.

The researchers first quantified the guppies’ natural movement speed by observing their movements when alone in an open environment, and found that there were large individual differences in how fast guppies tended to move. When the fish were subsequently tested with Robofish, the fish and Robofish tended to swim naturally together as a pair. However, the researchers observed that there were large differences in the social behaviors between the pairs: pairs in which the guppy had a faster movement speed tended to be much more aligned, more coordinated, and less cohesive, and the guppy emerged as a clearer leader. As Robofish behaved according to the same identical rules with each and every guppy, it is the individual speed of the guppies that must have led to these differences in group-level properties.

By involving state-of-the-art robotics, this research shows that individual speed is a fundamental factor in the emergence of collective behavioral patterns. As individual differences in speed are associated with a broad range of phenotypical traits among grouping animals, such as their size, age, and hunger level, the results of this study may help understand the role of such heterogeneity in animal groups.

Future studies using the interactive Robofish will focus on other aspects of collective behavior: For example, how can animals act in synchrony if they just respond to the actions of their neighbors? “We want to improve Robofish’s software so that it can predict and anticipate the live fish’s next steps, which is assumed to be how animals do it.” says David Bierbach.

Understanding these mechanisms is not only fundamentally important as it reveals information about the mechanisms that underlie collective behavior and decisions, but also because this knowledge can be applied to artificial systems and used to develop machines that move collectively, such as robot swarms, driverless cars, and drones.