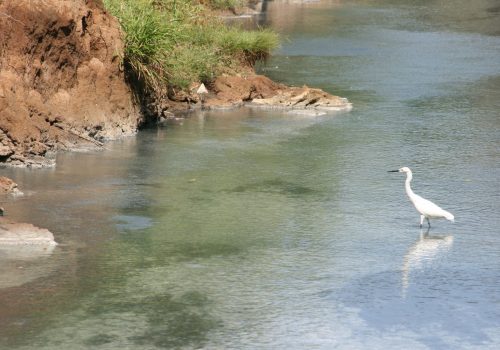 It is a fascinating phenomenon: thousands of fish moving like a giant Mexican wave in the water, diving down and coming back to the surface over and over again for up to two minutes. While humans engage in this kind of collective behavior for fun in football stadiums, animals may do it for more serious reasons: to avoid getting eaten by predators. This is a common assumption in biology for the function of collective behavior in general, but empirical evidence, especially from the wild, is scarce. A team led by the Cluster of Excellence “Science of Intelligence” at TU Berlin, Humboldt-Universität zu Berlin and the Leibniz Institute of Freshwater Ecology and Inland Fisheries (IGB) now found that the “Mexican waves” collectively produced by tiny fish living in Mexico indeed reduce both their predatory birds’ propensity to attack as well as the birds’ hunting success. Functionally, these waves may work as a signal from the fish to the birds: “We know you are there, don’t waste your time on attacking us!”

The Baños del Azufre springs, located around the Mexican city of Teapa, are a strange environment for fish: because they are volcanic springs, the water is high on toxic hydrogen sulphide and very low on oxygen. Only specially adapted fish like the sulphur molly (Pocilia sulphuraria) can survive there. But the water is not the only challenge these fish have to cope with. While the fish spend much of their time close to the water surface to breathe, many different bird species attack them. Fortunately, these 2-cm-small fish are not entirely defenseless; they appear in large schools comprising often more than 100,000 individuals, and when a bird approaches or attacks, the fish react collectively by diving down in a staggered manner, each fish touching the water surface with its tail. From a distance, the school as a whole appears to be producing conspicuous waves that resemble those first seen in human football stadiums during the 1986 FIFA world cup in Mexico (and called “Mexican waves” since then). Most interestingly, the fish perform these waves over and over again, sometimes for up to 2 minutes. The Berlin-based research team with their Mexican partners from the University of Tabasco investigated whether this wave motion has an influence on the behavior of the attacking birds that hunt the fish.

So, the question was whether the waves produced by the fish change anything in the birds’ attack behavior. And indeed, the researchers found that the more waves kingfishers experienced after their initial attack, the longer the birds waited to attack again. “Sometimes the birds even left the scene before making their next attack” says Carolina Doran, one of the lead authors of this study. Interestingly, however, not all attacking birds cause fish to produce these repeated waves: Kiskadees, another bird species, have a different way of attacking that involves just inserting their beaks into the water, thus not creating as big a disturbance at the water surface as kingfishers, which attack by diving into the water with their whole body. Kiskadee attacks cause the fish to only produce only a single wave and this allow the birds to repeat their attacks over and over again, with very high frequency. This observation has led the researchers to carry out an experiment to investigate the antipredator effect of waves. They induced repeated fish waves themselves by shooting little objects into the water (thus simulating a kingfisher’s attack) whenever kiskadees started a hunting bout, e.g., when a first attack was launched. When faced with multiple waves, kiskadees delayed their attacks just like kingfisher would do under natural conditions. Also, their attack success dropped and they were more likely to switch to other parts of the river where there was no waving going on.

More than a mere flight reflex: the wave is meant to cause confusion and could also be a signal to the bird

Fish diving down to escape birds is a commonly observed phenomenon, but repeated diving even when the attacking bird is away is a unique feature of this system. “Because the observed waves were conspicuous, repeated, and regular, and the intervals between the individual waves were always of similar length no matter how often the fish repeated their waving, we assume that the wave movements are more than a mere escape reaction,” explains David Bierbach, another lead author of the study. The authors thus argue that the waving behavior could also function to confuse the attacking bird especially when waves are “running away” from the predator. But this may not be the full story: The waving could have evolved as a signal from the fish to the birds, with both fish and birds benefitting from it. Birds can save time and energy if they don’t attack waving fish, because their chances of success are low. Fish, on the other hand, benefit from signaling when they detect a predator because the predator may hunt elsewhere as a result. “Such a win-win situation is necessary for a collective signal to coevolve between prey and predator species” explains Jens Krause, senior author of the study. “In the end, we need to look in more detail at these systems to understand how collective behaviors like perception advertisement really evolved” adds Juliane Lukas, the third lead author. In a next step, the researchers want to answer the open question of how many individual fish have to participate in the waves in order to have the effect of delaying attacks and reducing attack success.