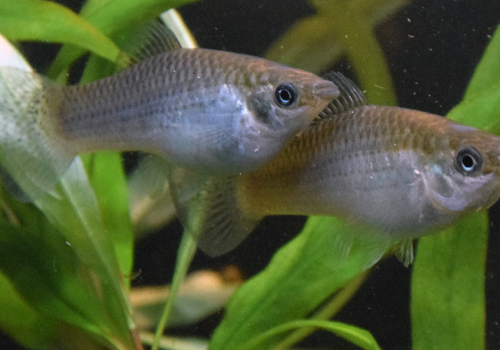 PRESS RELEASE: Personality differences from day one after birth despite identical genes and identical environment

Experimental twin research: Personality differences from day one after birth despite identical genes and identical environment

According to current knowledge, personality is determined by genetic predisposition and environmental influences. If genetically identical individuals grow up under identical conditions, are these individuals completely identical? So far, twin studies have reached their limits in answering this fundamental question. A team of researchers from the Leibniz Institute of Freshwater Ecology and Inland Fisheries (IGB) and the Cluster of Excellence “Science of Intelligence” at the Humboldt University zu Berlin has now shown for the first time in naturally clonal fish that genetically identical individuals already differ in their character traits on the first day of life and that these early character differences significantly shape the behavior of the animals into adulthood. The study was published in the journal Nature Communications.

Until now, it has been assumed that differences in the genome and environmental conditions play the decisive role in the formation of differences in personality. “But there have been no experimental approaches to completely rule out these two factors,” explained study leader Dr. Max Wolf of the Leibniz Institute of Freshwater Ecology and the Cluster of Excellence. “Our experiment shows how behavioral individuality emerges in the absence of any genetic or environmental variation.”

Max Wolf and his team have shown that animals with identical genetic material and identical environmental conditions develop different personality traits from the first day of life, which continue to strengthen and stabilize throughout their lives. The researchers studied the behavior of the Amazon molly (Poecilia formosa). These fish naturally reproduce clonally. The offspring are therefore copies of the mother and thus genetically identical. There is also no brood care. They can therefore be kept individually under identical conditions from day one.

With the help of a high-resolution tracking system, the behavior of the Amazon molly, which were kept in identical environments immediately after birth, was recorded over the first 10 weeks of their lives.

Individual personality as early as day 1 after birth

“We found that strong behavioral individualities are already present on the first day after birth – for example, the animals differ systematically in their activity patterns. These differences in individual behavioral patterns persisted throughout the ten weeks of the experiment and even gradually increased,” explained Dr. David Bierbach, one of the two first authors of the study and also a scientist in the Science of Intelligence Cluster of Excellence and at IGB.

The team of David Bierbach and Max Wolf was already able to show in a previous study from 2017 on Amazonian mollys that behavioral individuality emerges despite identical genes and identical environment. In the current experiment, the researchers were now able to demonstrate that this behavioral individuality is already present on day 1 after birth.

“This is the first experimental evidence that individuality in later life can be strongly shaped by prenatal factors, such as the nourishment in the womb or other maternal effects, epigenetics and pre-birth developmental stochasticity,” David Bierbach summarized.