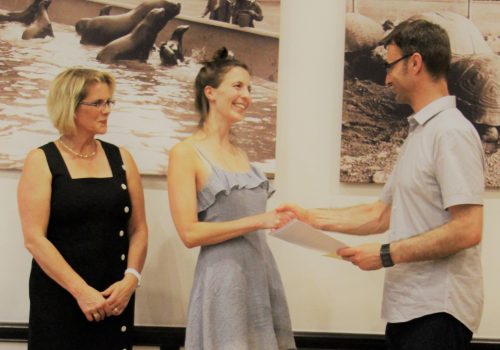 The Dr. Wilma von Düring Research Prize is awarded by the Society of Friends and Supporters of Veterinary Medicine at the Freie Universität Berlin (Gesellschaft der Freunde und Förderer der Veterinärmedizin an der Freien Universität Berlin e.V.) for excellent dissertations in the field of animal welfare. The award is associated with a cash prize of € 2,000.

Since completing her dissertation project, Katharina Hohlbaum has joined our team at SCIoI as a postdoctoral researcher where she is working with colleagues from the field of Computer Vision & Remote Sensing at TU Berlin and animal behavior specialists at FU Berlin on proofing and modelling intelligence in mice in an individual as well as social context. They are further examining how emotional signaling is involved in social learning. In a first step, they developed a semi-automated pipeline to automatically recognize the well-being status of a mouse from its face using a deep learning neural network framework. Results of this work will help to understand intelligent behavior and contribute to animal welfare of laboratory mice.